Japan - In the Eye off the Beholder

After a nice and entertaining week in Barcelona where I had the privilege not only to hold a seminar at the Universitat Autònoma de Barcelona, but also to meet a host of interesting people, I thought that it would be about time that I finished my piece on the latest data from Japan which admittedly will be a bit backward looking, but hopefully interesting nonetheless.

Beauty, as they say lies in the eye of the beholder and perhaps this axiom is worthwhile contemplating when thinking about the immediate condition of the Japanese economy or indeed the global economy and her asset markets, but for the sake for simplicity . Consider for example the news, out a week ago, that Japan's current account surplus widened 10% in August over the year. In an economy where external demand is the main driver of economic growth, this is a significant piece of news and should rightly be interpreted as a positive sign. Or should it?

Once we read beyond the immediate headlines it becomes clear that what we are really seeing in Japan is, in fact, a pendant (even if less severe) to the Spanish situation where the improvement in the external balance comes, not from a sustained and independent pick-up in external demand, but rather from the fact that domestic demand is contracting faster than external demand thus pushing up the current account. In Japan, exports slid 37.1% on the year but as imports shed a corresponding 41.2%, the current account improved as a result. Naturally, some would want to insert the point here that since Asia (and in particular China) seem to be the locus of small, but definitely noticeable, upbeat signs in the global economy, Japan should be at the forefront to snap up the gains. Surely this is true, and one wonders how far exports would have tumbled on the year if China had not been there to pick up the slack; yet, as we can see from the figures above; the downward momentum remains in spit. It seems, that beauty indeed is a subjective concept.

With respect to the most recent event as it were in the Japanese economy, the BOJ meeting held last week did not really bring much new to the table with respect to policy measures as rates were kept in QE mode. However, and as Societe Generale's Gleen Maquire points out in a recent publication (the weekly monitor) the point is moving closer with respect to whether the BOJ will extend its extraordinary credit measures or stop them. This would then be a discussion about the much debated exit strategies by part of especially the G3 central banks; how it will be conducted and equally as important when. The current message seems to be that while it is difficult to see the BOJ abandoning ZIRP any time soon, the BOJ is not going to extent the current measures of credit support in the form of the purchase of corporate bonds and commercial paper as well as a special funding program for corporate finance facilitation from the point of view of banks. As Maquire correctly points out and regardless of whether ZIRP is set to continue or not, a withdrawal of these measures would naturally represent a de-facto policy tightening and it is unclear just what the effect will be on the Japanese economy.

Moving on to a piece by piece look at the recent monthly data, August's numbers did bring with it a bit of light (September number will be out at the end of October) although the fundamentals have hardly changed.

Kicking off with domestic consumption, the headline figure reported by the statistical office clocked in a nice increase of 2.6% y-o-y which is of a magnitude not seen since January 2008. It is interesting to differentiate the headline figure of 2.6% (which is a real figure) is in somewhat stark contrast to the nominal decline in the consumption of workers' households of 1.4%. At this point, the average monthly change on an annual basis for the overall consumption index in Japan is -1.2% (up from -1.8% before the 2.6% figure reported from August); I will hold off any premature conclusions of a sustained pick-up in consumption before seeing what is in store in the coming months. 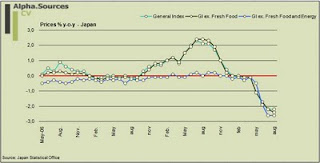 Realistically, it will be very difficult for the Bank to forecast positive inflation over the next two to three years. The Consumer Price Index continues to fall sharply and the output gap remains extraordinarily large by any metric. With the yen now appreciating and political opposition to a stronger yen having passed with the Liberal Democratic Party losing power, Japan is likely to remain more at risk of deflation than inflation over the entire period including calendar 2012.

Especially the point on the output gap is important even if we don't observe this specific data point. I would add the qualifying comment that one thing is the size of the output which in some sense would signify the immediate damage incurred by the Japanese economy in the context of the financial crisis and another thing is the speed (and ability) with which Japan can close this output gap on the basis of domestic activities alone. A point that I would especially emphasise here is the simple fact that the potential growth rate of Japan is likely to be in an almost perpetual decline due to the demographic situation. In this sense, it may increasingly become a question of what in fact the potential growth rate is based on domestic activity (i.e whether it is positive at all) than a matter of closing the output gap.

On the labour market, things improved rather surprisingly in August with the unemployment rate declining from 5.7% in July to 5.8% in August.

In the context of the financial crisis, the unemployment rate has so far increased roughly 2% and although the number in no means is alarming in a relative sense, the prospect of a continuing increase is sure to make cautious consumers even more cautious.

Turning finally to the corporate sector, industrial production has recovered somewhat after the absolutely horrid decline observed in the first half of 2009. The question is the extent to which we should see this as a decisive positive sign or not. 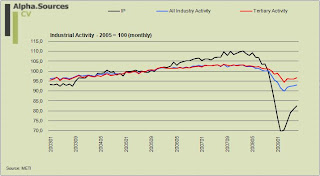 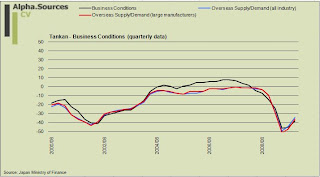 Once again, this is a matter of interpretation but when for example the Swedish bank calls it a "new dawn" for industrial production after looking at the graph above I find it difficult to see exactly where this dawn is. Consequently and while it is certainly true that the index for industrial production has recovered some ground after bottoming out in February 2009, it is still situated 18.3% lower than its average value (measured from January 2003 to July 2009). This compares with an index for all industrial activity running some 7% below its historical average. These numbers are innocuous in themselves, but the important thing is the level of activity which can be supported by the Japanese economy and although we are certain to see some recovery in the data the underlying momentum may ultimately disappoint. 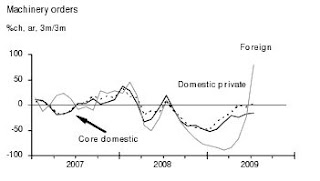 The chart above taken from JPMorgan's Global Datawatch is perhaps the clearest picture of what export dependency means in the case of Japan and how it drives the level of industrial activity.

With respect to the Tankan, the survey showed a pick up in sentiment which follows leads nicely the pick up in real economic activity. Pessimists still outweigh optimists by a rather large margin and it shall be interesting to see whether the apparent (and indeed lingering) positive sentiment among global market participants will spill over forcefully into expectations and investment plans moving forward.

Summary - A Beauty or a Beast?

Some of you may feel that I am spinning the story of Japan too much towards the negative sign. I don't believe this is the case however, and although I can see that some positive signs have emerged, I remain skeptical that it will be enduring. Call me a permabear, but 3-4 years of Japan watching has taught me to be careful when it comes to emphasizing positive news on the Japanese economy, and especially so when it comes to the momentum of the domestic economy.

This brings us to the global economy and the simple fact that the extent to which one would narrate the outlook on the Japanese economy in relative positive light would be tantamount to the extent that one also sees a relative benign outcome for the global economy. Here I am also skeptical which is ultimately also why I remain cautious on Japan and especially so in an environment where the JPY does not seem to benefit from low volatility and risk proneness to the same extent as before the Fed engaged in QE. But that is certainly a discussion for another day; for now, I will leave you my dear reader with the judgement on the immediate outlook for Japan's economy remembering full well that beauty indeed lies within the eye of the beholder.

Japan's US Treasury holdings through August

Note yet another increase in spite of continued yen strength. 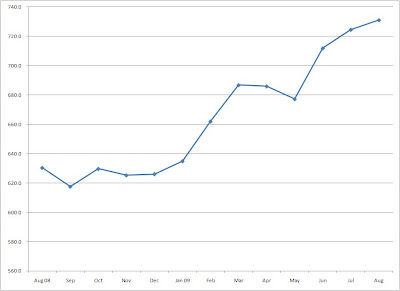 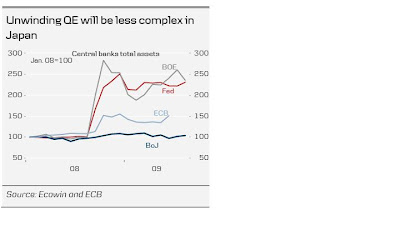 Source: Danske Bank
Posted by Scott at 12:41 AM

Japan's US Treasury holdings through July 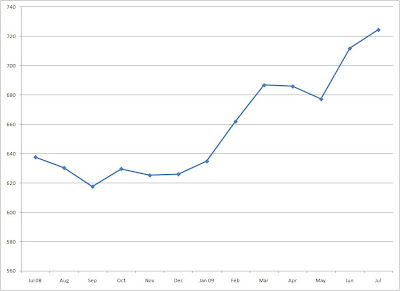