Japanese Housewives Back in the Game?

I am sure all investors, analysts, and commentators have been tracking a wide range of indicators to gauge whether the shoots of green would continue to spark or whether it was merely a blip on the way down. Clearly, this has been and is a little more than a blip I think and for my own part, decisive evidence came today that things might have changed. I am of course talking about the Bloomberg report (also here) that Japanese housewives are once again making their presence felt in currency markets playing the carry wheel.

Individual investors in Japan increased bets to the most in six months that the yen will weaken as the economy stabilizes, jumping back into a trade that was all but wiped out last year.

Businessmen, housewives and pensioners held 153,326 margin contracts at the end of last month that will make money if the yen declines against currencies ranging from the euro to the Australian and New Zealand dollars, according to the Tokyo Financial Exchange. All told, they may have as much as $125 billion in yen so-called short positions, RBC Capital Markets strategists said. “Investors believe the worst of the global recession is over and higher-yielding currencies are bottoming out,” said Yoshisada Ishide, who oversees $1.8 billion as a Tokyo-based fund manager at Daiwa SB Investments Ltd., a unit of Japan’s second-biggest investment bank.

Now, I have had my eyes on the Japanese housewives on more than one occasion (especially here) because I think that the tendency of Japanese retail investors to scour the global economy for yield runs a bit deeper than a simple carry trade play. Well, it is of course a carry trade but the underlying impetus for Japanese retail investors to act as they do also has something to do with a decline in home bias due to a low domestic interest rate environment as a result of demographics and subsequent sluggish domestic demand. The point is simply that one of the only ways Japan can achieve sustained is to mobilize its large stock of savings and, more importantly, to mobilize it abroad (e.g. through the purchase of samurais) in order to get the yield which is not obtainable in the domestic capital markets.

In the current environment of financial crises, great depressions, and credit crunches Ms Watanabe et al. have of course, in line with most other risky asset punters, been pulling back their fangs. However, with the recent narrative of green shoots and second derivatives it was also always going to be the question of when, if at all, carry trading would return as per function of declining volatility and appreciation of risky assets. As I have suggested lately, tentative signs have emerged that carry trading activity has slowly been coming back.

Now, it can be debated whether the apparent return of the Japanese housewives to the carry trough represents evidence of a solidification of the green shoots or, as a friend suggested to me, a contrarian indicator that things will soon hit the fan again. This particular friend of mine is an investor, so you are probably better off listening to him than me. There is also the small question of the targets for Ms. Watanabe's allure in the form of the usual, OECD, suspects such as the Kiwi, the Aussie, and the Euro. 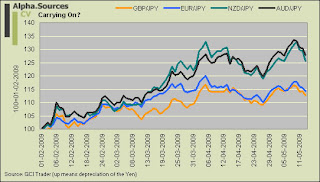 Looking at the chart to the right the recent three months which have been marked heavily by the green shoots discouse, it is quite obvious to see that the JPY has depreciated accross the board against the usual suspects. It is difficult to say whether MS. Watanabe has had a hand in this, but more interestingly is also the fundamental question of where the carry trade activity is going to be conducted in the future?

Specifically, it will be interesting to see whether there is going to be a change in the game whereby the OECD economies currently engaged in QE and with subsequent credible commitments by the central bank to keep rates low become funding for a carry trade to exploit the potentially "low volatility" growth (yield) in places such as India, Brazil and Turkey. Clearly, the BOJ has the mother of all credible commitments here in the sense that nominal interest rates have hardly budged the zero bound for more than a decade even in the midst of booms. This last point need careful watching I think as well as of course we might as well get another bout of volatility which could fold the, after all, fragile green shoots.

So, it does indeed seem as if the Japanese housewives are back in the game, but another fundamental question is whether the housewives ever left the game. This is to say that we need to look at structural long term outflows as well as more short term punting in order to really understand the what drives MS Watanabe and her fellow Japanese retail investors.