Japan’s June exports fell at the slowest annual pace this year, helping the trade surplus widen for the first time in 20 months. Shipments abroad were down 35.7 percent from a year earlier, following a 40.9 percent in May, according to the Finance Ministry. The surplus widened to 508 billion yen ($5.4 billion). 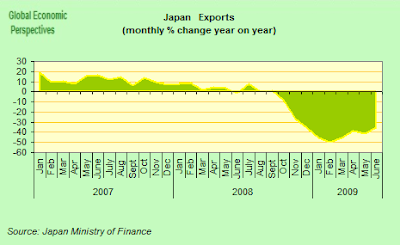 Real exports (adjusted for price change impacts) rose an estimated 8.0% over May (according to Nomura calculations), the fourth straight monthly increase. Q2 real exports were up 12.2% over the previous quarter, demonstrating a strong rebound from the 28.7% decline in Q1. Exports are clearly stronger. Nomura estimate that external demand made a +1.1ppt contribution to real GDP growth in Q2, a complete tirnaround on the –1.4ppt contribution in Q1. The export orders index in the manufacturing PMI, which many see as a leading indicator of Japanese exports, was also up 1.4ppt month on month in June, marking the sixth straight monthly of increase. 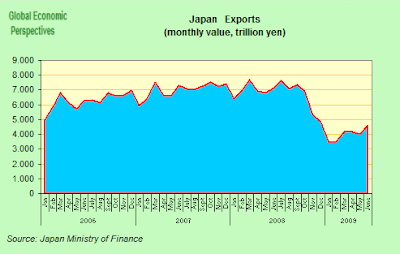 
Faster growth (and faster lending) in China is evidently propping up sales for Japanese manufacturers. China, which grew an annual 7.9 percent last quarter, has now surpassed the U.S. as Japan’s biggest export customer. Chinese government subsidies to encourage consumer spending and investment in building projects have benefited Japanese manufacturers. In fact June exports to China fell 23.7 percent from a year earlier, the smallest drop since October. 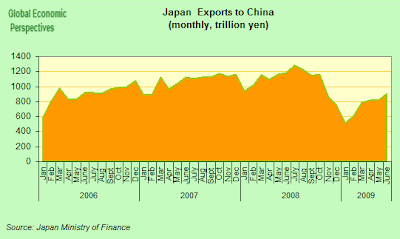 Shipments to the U.S. declined an annual 37.6 percent, the least since December. 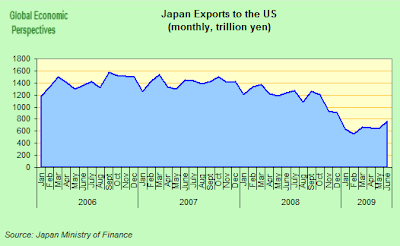 Sales to Europe slid 41.4 percent, the best this year, but still steep on the back of very weak quarterly growth 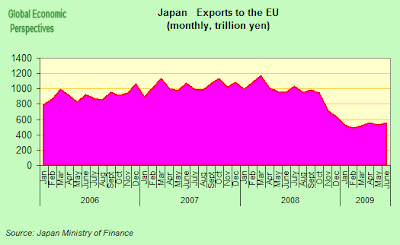 The largest contribution to higher exports came from electrical equipment, chemicals and transport equipment. Real exports of electrical equipment rose 23.9% q-q in Q2, following a decline of 26.9% in Q1, chemicals rose 23.2% (–10.6% Q1), and transportation equipment 7.7% (–42.0% Q1). The large increase in electrical equipment exports is generally thought to be related to higher exports of semiconductors and electronic materials, which are heavily weighted towards Asia. Exports of general machinery remained weak, falling 8.0% q-q in Q2 (–31.8% in Q1). Machinert exports have failed to recover since falling sharply at the end of 2008, and this is evidently a reflection of persistent weakness in capex generally, something which should serve to question a little the overall robsutness of recovery.

Japanese machinery orders dropped in May to a record low (see table below) with firms limiting their spending as the economy remained weak. Core private sector machine orders, viewed as a key indicator of capital spending, fell 3% from April to 668.2bn yen ($7.1bn). May's drop is less than the 5.8% fall seen in April, but still in sharp contrast to the 2% rise analysts had forecast. 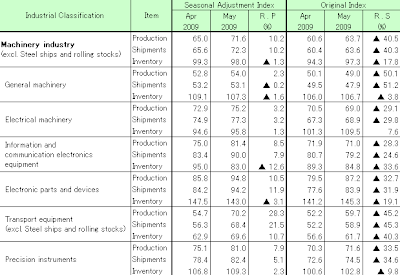 Japan is under continuing deflationary pressure, and consumer prices fell at a record pace in May, adding to the risk that deflation will become entrenched. Prices excluding fresh food slid 1.1 percent from a year earlier after dropping 0.1 percent in the preceding two months, the statistics bureau said today in Tokyo. This was the sharpest decrease since comparable figures were first compiled in 1971.

Even excluding food and energy, consumer prices fell 0.5 percent in May, the fastest pace in 22 months. Core prices in Tokyo, a harbinger of national inflation trends, fell 0.7 percent in June from a year earlier, making for the biggest drop in six years. The Bank of Japan now forecast that core prices, the central bank’s key gauge of inflation, will slide 1.5 percent this fiscal year and 1 percent in the next.

And wholesale prices seem to suggest worse to come. Japan's domestic corporate goods price index, the nation's benchmark measure of wholesale prices, fell a record 6.6% in June from June 2008. The result was marginally stronger than the 6.3% fall forecast in a survey of economist by Kyodo News and the 6.4% projected in a Reuters poll. It was also the largest on-year tumble on record. From May, the index was down 0.3%. Export prices were down 12.8% on year in June, while import prices were 32.2% lower. 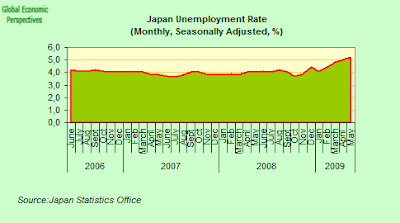 Falling wages and unemployment rate at a five-year high are forcing households to reduce spending. Japan's jobless rate rose to 5 percent in April, the highest since 2003, and there are about two people looking for work for every job vacancy, the most severe job shortage on record. The Organization for Economic Cooperation and Development have forecast Japan’s jobless rate will rise to an unprecedented 5.8 percent in 2010. Real wages have now fallen for 11 consecutive months, the worst performance in six years.

And there may well be much worse to come. The government now estimates the number of surplus to requirements workers in Japanese companies jumped to 6.07 million in the first quarter of the year. This was the highest level ever recorded, according to the fiscal 2009 Annual Report on the Japanese Economy and Public Finance.The number of excess workers is calculated by subtracting the number of what the Cabinet Office deems to be the optimum number of employees from the actual number of employees. According to the white paper, the number of surplus workers had been on a declining trend after hitting a peak of 3.59 million in the first quarter of 1999, now, as can be seen in the chart below it is surging once more, and will be a harbinger of huge layoffs if global demand for Japanese products doesn't really pick up soon. 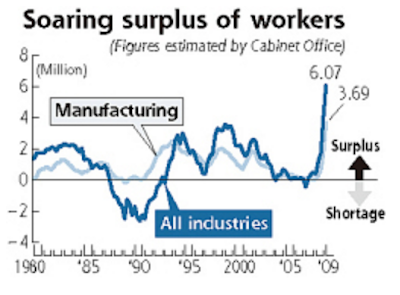 Unsurprisingly Japan’s retail sales dropped for a ninth month in May. Sales slid 2.8 percent from a year earlier. Department-store sales fell 12.3 percent in May, the 15th monthly decline, and supermarket sales also slumped. From a month earlier, retail sales were unchanged after rising for the first time in eight months in April.And declines in consumption may accelerate in coming months once the effect of Prime Minister Taro Aso’s stimulus measures wears off. The Japanese government has given cash handouts to residents, as well as tax breaks for fuel-efficient cars and incentives for buying eco-friendly televisions, refrigerators and air conditioners, and still sales fall. 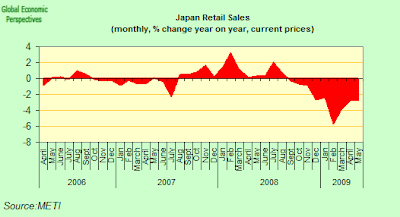 Given the extent of the stimulus programme it is perhaps not surprising that Japan's overall household spending rose 0.3 percent in May from a year earlier in price-adjusted real terms. This follows more than twelve months where Japanese households had been continuously pruning spending as companies cut jobs and bonuses. Compared with April on a seasonally adjusted basis, spending rose 2.2 percent. Spending by wage earners' households rose 1.8 percent in May from the same month a year earlier. 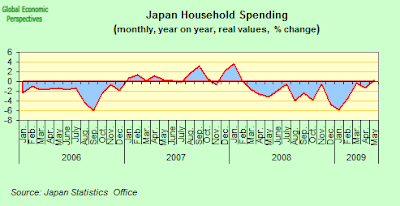 Basically, the future of the Japanese economy hangs on the future of the global one. It is hard to see the economy advancing on the momentum of domestic consumer demand alone, and we should expect the positive push the economy has received this year from the various stimulus packages to diminish in 2010 as the incoming government (of whichever party) finds itself increasingly constrained by the burden of the growing volume of government indebtedness.