Japanese industrial output was down again sharply in October as manufacturers forcecast further record falls in the months to come, leading to warnings that Japan’s recession may well be much deeper and even longer than originally anticipated. This rather bleak news on Japanese factory output may also be a pointer to a longer and deeper global recession, as Japan's main customers - the euro zone and U.S. - enter recession while growth slows sharply in China. 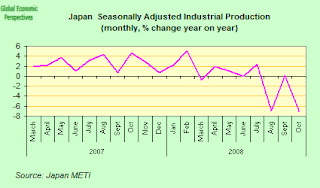 Industrial output fell 3.1 percent in October, significantly above the median market forecast for a 2.5 percent drop, and the outlook now is for a record 8.6 percent contraction in the fourth quarter. Industrial output has already fallen in all three quarters so far this year and, with exports and household spending now also in decline, it looks very much like the present recession can be a long and deep one, possibly the longest since Japan's two decade low-growth/price-deflation agony started in the early 1990s. 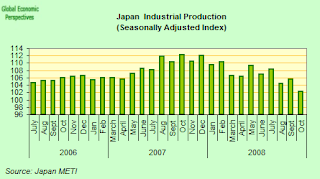 It now looks reasonably likely that Japan’s recession will run for at least two more quarters (until Q1 of 2009) which would make for a full year of consecutive contraction - if realised this will be Japan’s longest running recession on record. Obviously having the yen running close to 13-year highs against the dollar - around 95 to the dollar at the time of writing - isn't helping as it means either tighter margins or lost sales for exporters who earn their income in other currencies.

Japanese employers certainly seem to be readying for a long recession, and only last Friday announced plans to fire more than 30,000 temporary and part-time workers before the end of the business year as the recession deepens. Companies will lay off at least 30,067 non-permanent workers in the six months to March 31 (of these some 19,500 will be temporary workers in the manufacturing sector), according to a survey released by the Labor Ministry. These lay-offs would seem to be the logical consequence of the fact that Japanese manufacturers reported they were preparing the sharpest production cuts in at least 35 years - according METI's monthly industrial production report Japanese companies plan to reduce output 6.4 percent in November, the most pessimistic outlook since the survey began in 1973, and they are looking to follow this with a further 2.9 percent reduction in December, according to the Trade Ministry which consequently lowered its production assessment, openly taking the view that it is now on a “downward trend.”

Japanese core annual inflation slowed in October for a second straight month, fuelling concern that the sharp negative energy price shock heightens the risk of a return to deflation as we enter 2009. The core consumer index - which excludes volatile prices of fresh fruit, vegetables and seafood but includes the cost of oil products that are falling rapidly in price - rose 1.9 percent in October from a year earlier, slipping back from the 2.3 percent increase in September. Annual inflation excluding oil products dipped to 1.2 percent while Tokyo figures for November point to further falls in inflation.

If we look at what is known as the "core-core" index (which strips out both energy and fresh food) then we can see that it is far from clear that Japan ever really escaped from the deflation trap, since this reading has been completely flatlining around (and normally slighly below) zero over the last twelve months, and with a very large capacity overhang now developing, this index will almost certainly get back into negative territory very, very soon.

Bank of Japan Governor Masaaki Shirakawa however seems to downplay this issue, since he said last week that while he was aware of the risk the central bank forecast at this point is not registering a return to deflation. As a result there is no immediate likelihood of a return to ZIRP.The Bank of Japan currently forecasts core consumer inflation of 1.6 percent in the fiscal year to next March 31, followed by zero price growth in the following year, but these numbers are almost certainly going to be revised downwards.

Masaaki Shirakawa's rather complacent view of the deflation threat is not held on this blog, nor is it held by a number of other "Japan watchers", among them the OECD, who last week stated that Japan is facing the biggest threat of deflation among industrialized nations next year.

Shirawaka's view is not held by Masamichi Adachi, senior economist at JPMorgan Securities, either, since only last week he wrote in a report that "Japan is getting closer to the status of deflation and the nation's economy will further deteriorate without doubt." I can only wholeheartedly agree. It would be nice if policy in Japan could one day get in front of the curve, instead of seemingly remaining bogged-down behind it.


The Ministry of Economy, Trade and Industry reported that Japan's retail trade dipped 0.6% year-over-year in October. The reading represented a steeper decline than the 0.3% drop seen in the previous month. Economists expected a 1% decline for the month.

Meanwhile, sales of large retailers fell a seasonally 4.3% from the year-ago period compared to a 3.3% drop in September and the 4.2% decline expected by economists. 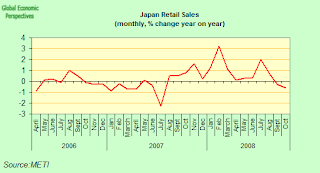