Well, the outlook for the coming months in Japan looks none too positive, with machinery orders and small business sentiment both plumming the depths right now.

Japanese machinery orders fell by 10.4 percent in the third quarter, equalling the biggest drop on record, as manufacturers cut their investment plans in anticipation of the impact of the global slowdown on overseas demand. The decline in orders, which is normally read as an indicator of capital spending the next three to six months, broadly equals a drop registered in 1998, the last time the Japanese economy fell into a really serious recesion..

Month on monthly Japanese machinery orders were up 5.5 percent in September, a move which was described by the government as a "weak rebound.''


Sentiment among Japanese small businessmen was the worst ever in October according to the lastest reading on the Economy Watchers index, a survey of barbers, taxi drivers and others who deal with consumers,which dropped to 22.6 in October, the lowest since the government started the survey in August 2001. 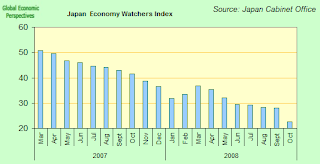 
And just to add to all the woes Japan's consumers became the most pessimistic they've been in at least 26 years in October, making it unlikely they will increase spending very much in support of an economy which has already beenweakened by slower global demand and falling stock prices. Japan's consumer confidence index dropped to 29.4 last month from 31.4 in September, according to the latest report from the Cabinet Office, that's the lowest reading since the Japanese government began compiling the figures in 1982. 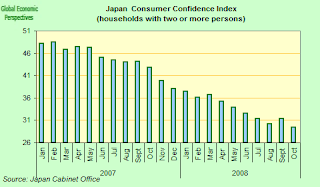 Among the four index sub components the outlook for wages stood out, since it dropped to the lowest on record. Confidence about employment also slid 4.1 points, the biggest monthly fall since 2004.

Japan's wages grew in nominal terms by only an annual 0.1 percent in September, and in real (price adjusted terms) they fell by 2.2% (the sixth consecutive month of real wage decline). Monthly wages, including overtime and bonuses, rose to 273,175 yen ($2,761) from a year earlier according to the most recent data from the Japanese Labour Ministry. 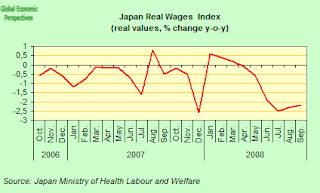