Spending by households dropped in Japan in July for the first time in seven months, according to data released today by the Statistics Bureau. Here's the chart: 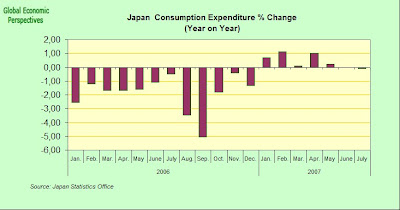 As usual, we are being told that the weather is the problem:

Spending by households unexpectedly dropped for the first time in seven months, as a typhoon kept shoppers at home and a tax increase weighed on sentiment.
Bloomberg

In fact, just a quick look at the chart should tell you that we may now be resuming a trend which was all too evident across a big part of 2006, typhoon or no typhoon. We haven't seen any upward movement in consumption worth speaking about since May. now
Posted by Edward Hugh at 10:26 AM
Newer Post Older Post Home