Scott in a comment to Claus's last post points us to a Bloomberg article which discusses a Goldman Sachs research note about whether or not a recession in Japan is now "inevitable". The good news, I suppose, is that a recession in Japan is certainly not "inevitable" - for the simple think that virtually nothing in economic affairs is inevitable - but that simple detail doesn't really get us very far, since the fact that a recession is not inevitable doesn't mean that we won't get to see one. As usual, and as with most things in life, it depends.

Let's take a look at some of the things it depends on.

First off if we look at the chart below we can see that this isn't the first time in recent quarters that the Japanese economy has appeared to slow: 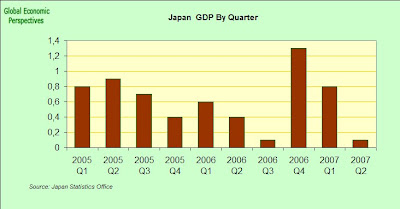 In Q3 2006 the economy seemed to be slowing, only to confound the critics by accelerating again in Q4. So the question is, what are the probabilities of this happening again. Now the following chart isn't especially beautiful, but it should help us see what has been happening. What this chart shows is the share contributed by each of the key components to GDP growth in any given quarter. 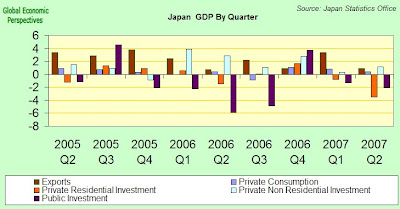 As can be seen, while exports are important, they are in fact not decisive. Perhaps I should rephrase that. The situation is rather asymmetrical. Whilst it is more or less unthinkable that a Japanese expansion could continue where exports to take a serious and sustained hit, the recovery needs more than simple exports growth to maintain momentum. So, if we look at Q4 2006, which is pretty much the key recent quarter, we can see that export growth was not much more than in Q2 2007 (the bad quarter), but what made the difference in Q4v 2006 was that all the stars were in alignment, and that the ship powered ahead on all engines, including was public and private-residential investment. In Q2 2007 both of these simply went into reverse gear. Now private consumption is, as we can see, pretty flat, and not decisive, nor - given what we know about the trend in Japanese earnings (and the ageing process) - should we expect it to become decisive at any point in the foreseeable future. So the key data to watch in the coming months will be public investment (ie, what is going to happen to the fiscal deficit now that Abe is in trouble) and private residential investment. If there is no regain of momentum in the property market then it is hard to see Japan's economy regaining momentum, and in the current sup-prime panic atmosphere, it is hard to see the property sector really getting into any kind of party mood. I guess this was one of the factors they will have been bearing in mind at the Bank of Japan when they took the rate decision.

So can Japan avoid recession? Of course it can. Will it? Aha, that is a different question. To find out the answer watch this space.

Japanese Economics Minister Hiroko Ota, reappointed in a reshuffled cabinet, said on Tuesday that she opposed an increase in government spending in Japan.

"It is not the time to increase fiscal spending," Ota told a group of reporters, adding the government needed to continue its reforms.

Prime Minister Shinzo Abe carried out a sweeping revamp of his cabinet on Monday after his first line-up was hit by a series of political funding scandals and gaffes that led to the ruling coalition's big defeat in an upper house election in July.

A key issue in the election defeat was a sense in rural areas that cuts in spending by the heavily indebted Japanese government had led to a growing disparity between rich urban and poorer rural areas.