Unemployment and the Japanese Labour Force

I'm afraid there are going to be rather a lot of charts on this post, since it is a complex story, and it is important to try and understand what is happening to unemployment in Japan, since if you don't you won't get to see why this recovery isn't a "normal" one. First off the statistics bureau have published the July monthly results from the Labour Force Survey. The headline story is, of course, that unemployment has dropped for yet one more month, and of course this is the principal story that the financial press serve us up.

But Friday’s economic figures also contained material for hawks at the BoJ, should they wish to use it. ...... the unemployment rate inched down 0.1 percentage points to a nine-year low of 3.6 per cent, suggesting tight labour demand will eventually create price pressure through higher wages.
Financial Times

Employment prospects improved. The jobless rate fell to 3.6 percent in July, the lowest since February 1998, from 3.7 percent. A ratio that shows how many positions are on offer for each job seeker held at 1.07, near a 14-year low of 1.09. "Steady improvement in the job market is a positive thing, but the question is when that's going to feed through to wages,'' said Hiroshi Shiraishi, an economist at Lehman Brothers Japan Inc. in Tokyo. "The consumption data in July was affected by one-time factors, but spending is decelerating.''
Bloomberg

So now lets take a look at the charts. First off the unemployment rate has been, as we can see easily enough, dropping steadily: 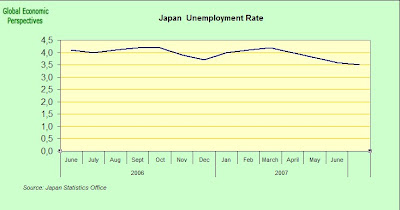 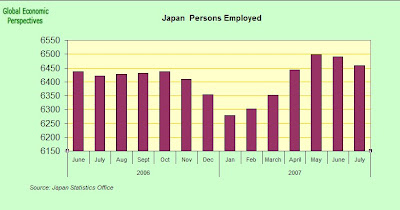 Well, as we can see here, the numbers of those employed have fluctuated, the number was dropping from last October, but did start to pick up again in March, and has now started to fall back again since May. The only point I wish to establish here is that, in the context of an ageing population, a drop in the unemployment rate is perfectly compatible with a falling number of persons employed, and as such the unemployment rate doesn't tell you that much about the earning capacity of the entire population.

But the situation is even more complex. If we look at a breakdown of what are classified as "regular employees" we will see that while the total number of such employees has been pretty stationary for some years now, in fact the number of full time employees has been dropping steadily since the late 1990s (Japan's structural reforms). What this reflects in part is that older workers retire from their full time employment and subsequently take up part time employment. This latter is less remunerative, and this, in part, explains the downward tendency in wages and salaries. 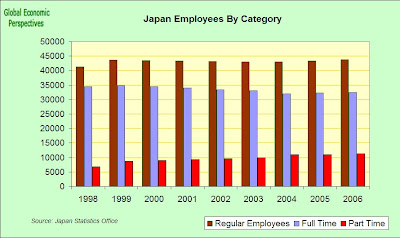 But the situation is even more complicated, since what we have above are the data for regular employees. But there are, of course, "not-regular" employees, and not a few of them actually, as can be seen in the following chart. 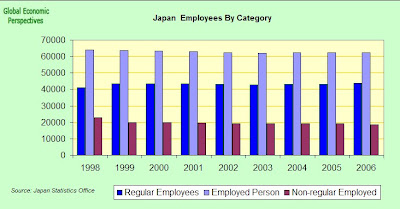 Well, there is more detail to go into on all this, especially in terms of participation rates and how this all affects earnings. But I think by now I should have made my point. The headline unemployment number doesn't tell you very much at all in Japan, and anyone who tries to use it to tell you that earnings push inflation is coming is selling you a pup, that is what they are doing.
Posted by Edward Hugh at 11:23 AM
Newer Post Older Post Home