Still Holding at the BOJ

At this point you could of course argue that with the current and ongoing uncertainty about the robustness of financial markets (i.e. a big black void of downside risk to just about any position) the BOJ's decision to keep rates on hold yesterday was expected. However, if we look at the way expectations of a hike have been trending steadily down in the past month it seems once again that what was a sure bet of a hike in the latter part of 2007 has now become somewhat of a bold bet. Before I move further I would like to direct the attention to my recent large note on Japan which is pretty much up to date as far as data goes and as I argued I would be very weary indeed of betting on a hike (which also did not come yesterday) as well as I emphasised how the economic fundamentals in Japan had changed thereby rendering the much illusive recovery to be fuelled by domestic demand. The only thing to add at this point in terms of graphs is the extension of the seasonally adjusted GDP series featured below which shows a stark slowdown relative to Q4 2006. Of course the correction seems set for a slight rebound in Q3 but it is readily clear at this point that we are fairing in much lower territory than has been widely predicted amongst commentators pushing the idea of a sustainable recovery. 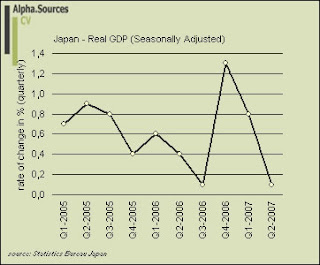 Turning to the decision yesterday which was put down on an 8-1 vote for a hold Fukui kept the door wide open for a hike in September in line with the changed discourse at the BOJ signalling that rates could be raised even in a context of what is perceived to be a temporary last spurt of deflation here in 2007. This could seem odd in the context of what also seems to be a clear downtrend of economic fundamentals as we move into the last half of 2007 relative to what had been expected at the turn of the year. Yet, the BOJ is also, and despite what might else be going on in financial markets, under considerable external pressure to normalize interest rates from other central banks. Most notably, we are talking those central banks presiding over the currencies in the long end of the much allured Yen carry trade. Here is consequently Glenn Stevens who is central bank governor in Australia as quoted by Bloomberg ...

Reserve Bank of Australia Governor Glenn Stevens told his country's parliament on Aug. 17 that ``the sooner the Japanese interest rates are able to be normal again, the better from the point of view of the global financial system.''

Of course, the pressue levied from Australia carries no de-facto leverage towards the BOJ but we need to remember that this is all part of the big picture. In this way, the Australian cb is one of the world's central banks who is still raising rates to combat inflation (currently, the main refi rate is at 6.50%). However, as I argued recently taking up the baton from Danske Bank's chief economist Carsten Valgreen the rules of the game for monetary policy seems to have changed somewhat. The point is simply that the global search for yield epitomized by SWFs, Japanese, housewives, pension funds, and ageing serves to create a self-reinforcing process which feeds on the very wide interest differentials. For many, Japan is the epiphany here with a main refi rate of 0.5% and as soon as the BOJ would normalize excess liquidity would dry up. However, we need to remember that in this context there is a risk that raising rates in New Zealand, Australia, and yes also the Eurozone might only serve to suck in more capital thereby fuelling already brisk growth in monetary aggregates and inflation (although of course the correlation between these is debatable). In this way, we could see this process as a counterbalance to the more traditional deflationary effect which comes from higher interest rates and an appreciating currency. With the recent turmoil in financial markets the door have of course been opened for a change on this proxied by investors' risk aversion. Especially, those emerging markets which are running current account deficits and which do not possess ample FX reserves to shield themselves against a flight to quality/safety could potentially be in for a turret ride.

Ok, this was rather large de-tour around the BOJ's rate decision but this is just to say that the whole picture is not as simple as to just bully Japan into normalizing interest rates. Regarding whether we are to believe Fukui's implicit narrative that the BOJ remains bullish enough to carry through a raise in the context of deflation as well as an economic slowdown I remain very careful. Of course, the recent news pointing to how secondary inflation is picking up proxied by corporate service and input prices gives some vindication to the BOJ's main forward looking forecast. Yet, I remain cautious as to how much we can depend on traditional analysis in this case and thus how much we can expect secondary inflation to feed into core prices. Moreover, we learned recently how exports slowed considerably to the US in July which after all is still Japan's biggest foreign market. Lastly, as Ken Worsley noted recently department store sales fell back in July on a yearly basis thus pairing the rebound made in June.

In summary, I don't see a raise on the horizon anytime soon at the BOJ. Whether you buy this call is of course up to you and I have indeed been wrong before. However, remember that economic as well as price indicators are likely to point against a hike in the months to come which leave the BOJ's inbuilt propensity to raise on the expectation of future sunshine as the crucial parameter to gauge in order to asses the likelihood of a future rate hike in 2007.